OAK PARK, ILL.—June 22, 2014—Wanting to keep up with her older brothers, she laced up her first pair of figure skates at age 3 -- but switched after one week to hockeys.

He took to the ice in his early teens, first on figure skates, and then quickly switched to racers.

They are Kendall Coyne, 22, and Emery Lehman, 18, members of Team USA who competed in the 2014 Winter Olympics in Sochi, Russia and who shared their stories of perseverance, practice and the value of parental guidance with a West Cook YMCA audience today. 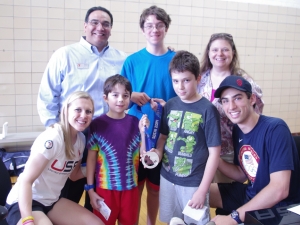 “Until I was 14, I played boys hockey, and only then did girls hockey pick up and become a real sport,” explained Coyne, of Palos Heights, Illinois who brought home a silver Olympic medal as a member of the USA women’s ice hockey team that lost a heartbreak game to first place Canada.

Coyne said that her parents’ mantra to “do your homework first, then you’re free to play,” motivated her. She said her years of practice paid off earlier this year when she was selected for the USA’s 21-member women’s ice hockey team.

A recent Oak Park River Forest High School graduate, Lehman will begin to pursue a civil engineering degree this fall at Marquette University in Milwaukee, not far from the Pettit National Ice Center where he trained for the past several years.

“I was the youngest member of Team USA and the youngest speed skater at the Olympics. I wouldn’t have had this wonderful experience --two of the most exciting weeks of my life-- were it not for my parents who urged me to consider speed skating and supported me all the way.

“Four days a week, my Mom made the 200- mile round- trip drive from Oak Park to Wisconsin so I could maintain a rigorous training schedule on a dedicated track with other skaters  focused on  the Olympics,”  Lehman explained.

Coyne and Lehman, are part of the United States Olympic Committee’s Team for Tomorrow program that places them on platforms to speak to young audiences about the value of staying active and living a healthy life.

It was obvious that these young USA athletes brought home more than memories and mementos of their Russian winter experience.

“It was a great thrill just to pull on my Team USA hockey jersey and see the legend on the inside that read, “Land of the free, home of the brave,” said Coyne.