Landing Pads: Temporary Housing for Homeless Returns to the YMCA 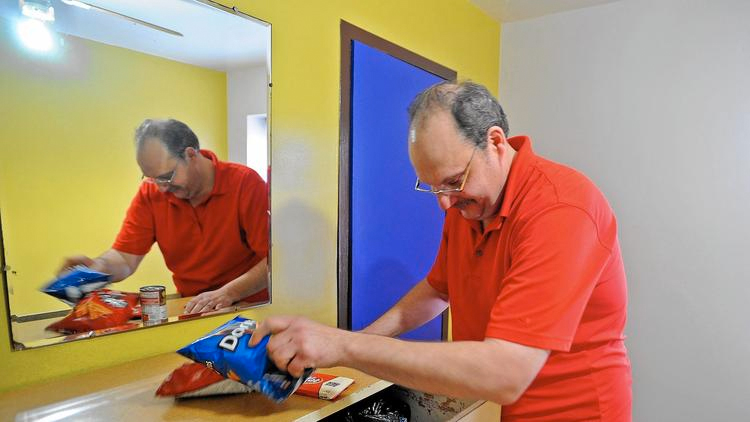 As he talks about his current life situation, Robert Engelhardt is quick to mention he was raised to be thankful for what he's been given.

Standing Feb. 4 in his simple room at the West Cook YMCA — with the single bed, dresser and desk filling most of it — Engelhardt, 53, says the little space isn't perfect, but it's his.

"I'm just very humble and grateful (they're) helping me out," he said. "Whatever you got, you should be grateful."

The West Cook YMCA and West Suburban PADS resumed an interim housing program in January, giving a number of PADS clients like Engelhardt a private, stable place to live as they take the next step toward independence.

As of Feb. 5, six of the 10 PADS clients initially slated to move into the Y, at 255 S. Marion St. in Oak Park, had settled into their rooms. YMCA Resident Director Chiquita Garner said the Y and PADS are working out financial aspects like rent assistance.

"This Y, to its credit, is committed to keeping the residents," said David Parsons, the West Cook Y's chief operations officer.

PADS clients are chosen for the YMCA housing program based on their income or enrollment in its Career Passport program, which prepares them for employment. They will live at the Y for approximately 90 days, although West Suburban PADS Executive Director Lynda Schueler says they're flexibility if a client needs more time.

Schueler said they approached the West Cook Y a few years ago about combining resources. The rotating nature of PADS shelters can make things tough for residents looking for work, Schueler said.

"This is a safety net," Schueler said.

A federal grant provided the funding for an AmeriCorps official, who offered support and assistance to the PADS residents at the Y, and more than 20 men went through the program. The partnership ran for about two years, until cuts brought an end to the program at the end of 2013.

As the program is renewed and expanded now that grant money is available, an AmeriCorps case manager will again offer on-site services with the goal of transitioning residents to permanent housing.

Y officials made sure to obtain an AmeriCorps official for non-PADS residents to work with as well, since they found last time that those residents craved the support offered to the PADS residents.

The AmeriCorps grant provides a total of $26,000 to the Y and PADS — $13,000 for each AmeriCorps case management worker.

Phillip Jiménez, the Y's CEO and director, said they estimate 35 to 40 men will be served by the program this year.

"The idea is that there's a flow of people coming into the program," Schueler said.

'The need is there'

As Oak Park has become increasingly unaffordable for some residents, the Y offers a realistic option, Schueler and Y officials said.

Currently, 96 of the Y's units are occupied; that number will rise to 106 once the first 10 PADS clients move in, Garner said.

"The need is there," Parsons said.

Rent for PADS clients is 30 percent of their income; each tenant also gets $250 per month as a temporary housing subsidy. Garner said they're trying to secure funding through Oak Park Township and grants to cover payment gaps, since many of the men don't yet have income.

Maurice Williams, a long-time Y resident, and Ismael Hernandez, who's lived at the Y almost a year, said they appreciate the ability to live independently within their means.

By living communally and going through the PADS employment program, Schueler said they hope to offer needed support to the men trying to move forward.

"We're all deserving of dignity and respect," she said. If the Y and PADS can help their clients and be effective in delivering these services, "I think it sends a good message to our donors and supporters."

Jiménez pointed out that Y members' dues help to subsidize resident living costs, and he finds it meaningful to see residents evolve and grow.

"The residency program has a special place for me," he said. "We have really high-caliber human beings living here."

Engelhardt, who was laid off from his fast food job in September, sought help from PADS soon after. He moved into the Y Jan. 23. He attends Grace Episcopal Church in Oak Park and has prayed there for some good news.

"I prayed for a place to live and I got something," he said.

Engelhardt hopes to find another job in the fast food industry, or in a warehouse. He added that he'd like to eventually retire and move to Florida.

"I hope I go back to work and get back on my feet, give back to society and enjoy life," he said.

Caitlin Mullen is a freelance reporter for Pioneer Press.

Go back | Show other stories | Send this page to a friend